The First Five Pages by Noah Lukeman. Seems you have to impress your readers pretty quickly. So here is the first 1200 words of “It started in Barbados” (working title only), a spicy roller-coaster of a romp between Criminal lawyer Annabel Prince and super sexy British aristocrat with a twist, Jeremy Delfante. Drop me a line and let me know if you want to keep reading…. or should I just kill them both off and start afresh?

It Started In Barbados – Chapter 1 extract

Annabel Prince swept down the steps of Merchant and Prince Legal and into the waiting limo, sank into the deep leather seat, toed off her Jimmy Choos and sighed. Her head pounded from a day spent pouring over documents on a criminal case she wished she’d never taken on. The douchebag was clearly as guilty as hell.

Impatiently she tapped the glass partition to let Gerard know to drive and stared out the window at the London drizzle full of grey London commuters and bobbing black umbrellas.

Barbados. She’d so rather be in Barbados. The thought made her pull herself up short. No she wouldn’t, the last time in Barbados had been with Jeremy.

Jeremy Delfante, the complete and utter tosser with a face like an archangel and the ability to make her orgasm in triplicate.

Heat prickled through her body, she shrugged off her suit jacket and pressed a thumb and finger to the bridge of her nose. Six months. Six months that felt like forever and she still couldn’t erase the memory of how his hands felt on her skin, his lips on hers, his cock inside—- No! she wasn’t going to get all lathered up about a guy who’d dumped her unceremoniously at Heathrow airport and never looked back.

She tapped on the glass again. Gerard reached his hand back to open it, his capped head still facing forward.
Annabel froze. That hand wasn’t Gerard’s. Shards of ice cascaded down her spine. She’d know this hand anywhere, because hell, the pair of them had been all over her. Long, fine boned fingers, blunt tipped with perfectly manicured nails.

She scrabbled back in her seat, gasped in a lungful of air and shot forward again.

“What are you doing here? Where the hell is Gerard?”
“Gerard’s been taken sick.” Her gaze flicked to the rearview mirror, two coal black eyes glittered back at her, a perfect brow arched up. He was laughing at her, damn him to hell.

“When I get you home.” He slammed the partition shut leaving her hyperventilating with rage. So smug, so self-assured. Problem was the rage was mingling with a tell tale throb between her thighs. She should jump out. She scanned the streetscape in desperation. Traffic lights. Stops signs, anything. But the central London traffic was remarkably fluid tonight. Had Jeremy engineered that as well? Knowing what he was capable of, quite probably.

Two hot spots burnt her cheeks, admit it, part of her wanted to let him drag her up to her penthouse apartment and right royally fuck her brains out. Six months without him had been a drought of humungous proportions.

Grinding her teeth, she squeezed her stocking clad thighs tight to stop the imminent flood and refused point blank to look at the back of Jeremy’s neck. That would completely unravel her.

Now what? Ok, ok, stay calm. No need to fight him, when they got to her place she’d get out of the car with as much dignity as she muster and call security.

And later she’d find a way to reap revenge for what was clearly another Jeremy stunt.

But for what reason?

Ten awful minutes later the black Mercedes purred into her underground parking bay. By now Annabel’s heart was blocking her airways, she wasn’t sure her legs would actually hold her up they were shaking so much. What a joke, she could outstare mafia leaders and psychopaths but she was a quaking mess at the prospect of looking into Jeremy Delfante’s crazily handsome face. And God help her if he touched her. She’d go off like a stick of dynamite.

The engine cut out and Jeremy jumped out. Another second and the passenger door was flung wide.

Her eyes grazed up his body, so damned edible in dark blue livery. Somehow she’d never noticed it on Gerard but the jacket hung perfectly over Jeremy’s lean hips, touches of gold braid stretching across pecs and biceps she remembered vividly. Pumped, naked and glistening in their beachside cabana. Her traitorous mouth watered.

A hand shot out to assist her, she ignored it, stood and wobbled. Her Jimmy Choos were still inside the car and she only came up to his chest in her bare feet. Like always Jeremy made her feel tiny and vulnerable, the only man she’d ever reacted to this way. His touch on her elbow, steadying her was whisper soft but enough to light the fuse. She felt her body ebb shamelessly towards him. His lips curled into a dangerous smile that hit her fair and square in the sweet spot.

“Hello Annabel.” The words dripped like honey for the bees, luckily this bee finally managed to remember her sting. She yanked free. “Don’t you Annabel me, I’m calling security.”

“Just watch me!”
He nudged her away from the open door, slammed it shut and clicked the remote. “All locked up. Your mobile’s nice and snug on the seat.”

So tempting to kick him in the shins and wipe the smirk off his face, but that would mean contact and he was much bigger and stronger than her. She wrestled off an image of those arms rolling her effortlessly into every pleasurable position known to man. Frankly, the Karma Sutra had nothing on Jeremy.

“I’m not taking any more of your neanderthal shit.” She hissed. “Now open the door and let me get my stuff.” She stepped back sharply just to make sure she didn’t jump into his arms and wrap her legs around his waist. Not a good look for a partner in one of London’s top criminal law firms.

Her mouth fell open. Talk! That had never been Jeremy’s thing. When he left there had been no contact, no explanation. Absolutely nothing. Just a great big empty bed and a gaping need that ripped through her every night for weeks.

The snap as Annabel closed her lips was almost audible. “We have absolutely nothing to say to each other. You made that crystal clear six months ago.”

Was he moving closer? “We never got to say good-bye.” The words were soft, but his eyes were dangerous and up close the vision of trimmed beard meeting tan throat had her fighting off some serious nibbling fantasies.

“Is this your idea of a bad joke? Bribing my chauffeur, or murdering him for all I know, then kidnapping me and-“ Words deserted her as the corner of Jeremy’s mouth tilted, the asymmetry in his face so bloody perfect she almost burst into tears.

“Actually Gerard was all for it. He said you’d been missing me.”

Annabel fisted her hands and felt her fingernails dig into her palms. “That’s a flagrant lie and you know it.”

Jeremy gave her The Look, the one that made her toes curl and her mouth prone to babbling incoherent nonsense.

“Gerard notices things Annabel. He’s been driving you around since you were a kid.” A lazy heat descended on his features, his voice dropped an octave. “So, have you missed me?”

Her palm itched to slap him across one smug chiselled cheek. Hard. Or kiss him harder. It was bewildering, her blood pounded in her ears. A waft of spicy cologne took her straight back to a beach in Barbados and beneath that, the warm male scent that could only be Jeremy. 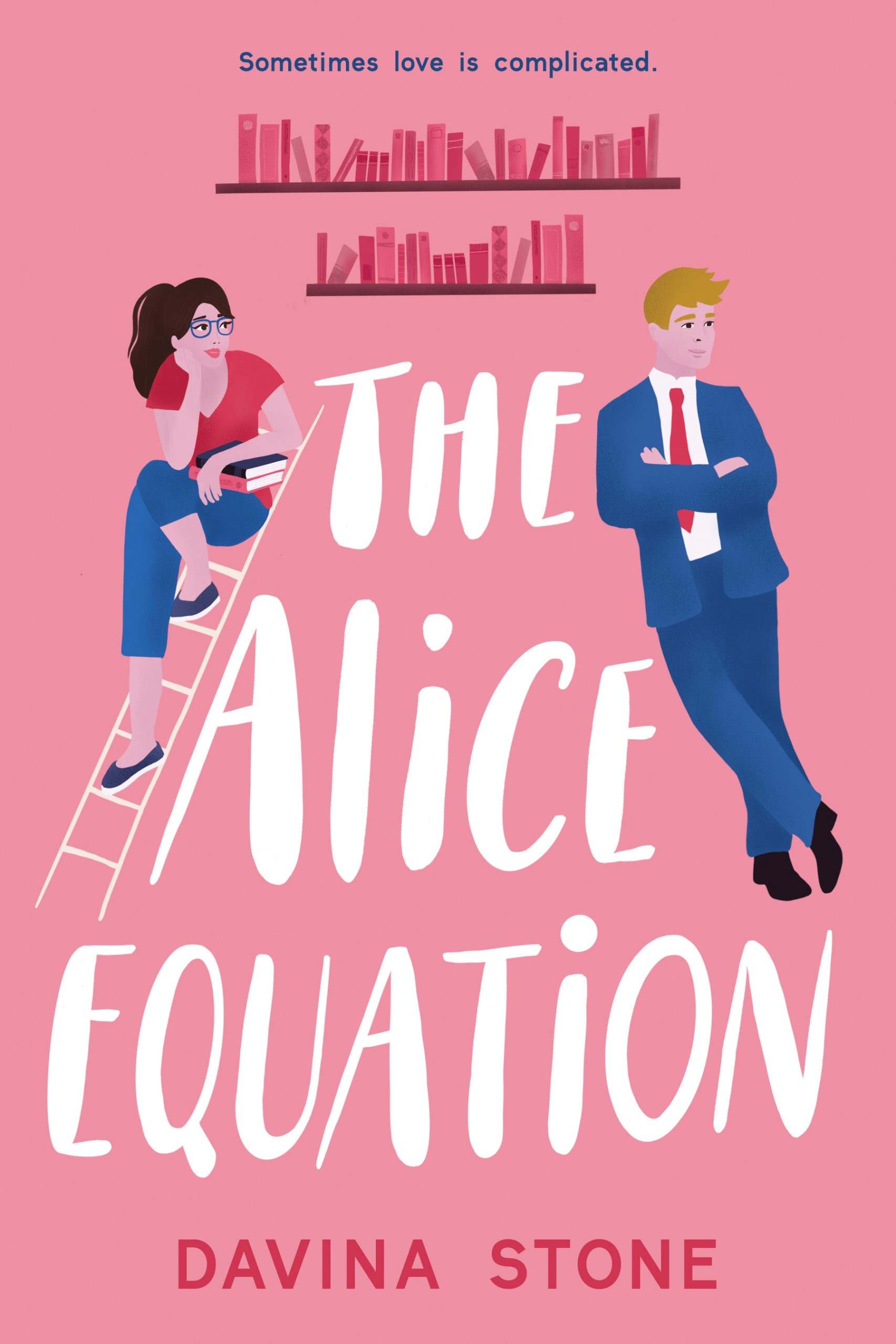 The Alice Equation
See The Book

Davina Stone writes romances about flawed but lovable characters who tend to get it horribly wrong before they finally get it right. They also kiss a fair bit on the way to happily ever after.